Five months ago our youngest daughter Ashleigh surprised me and my wife, Leanne with tickets to watch

What an absolutely fantastic weekend we had….From the minute we arrived at the Hotel in Edinburgh and to my amazement, the same hotel as the Scotland Rugby squad.

They were milling around the foyer and the coffee shop, just chilling relaxing and chatting with fans.

Having quickly unpacked, it was time to sample a coffee ‘at the coffee shop’ and maybe grab a few selfies with my team.

Mission completed, and a few photographs later the excitement was building for the match tomorrow.

Together with the tickets, our Ashleigh had also bought us both assortments of headwear, flags, and scarf’s etc and ordered us to wear them all!

‘To those of you that don't know my parents, when the 6 nations is on TV you best not be in the house as it's really intense, peanuts flying at the TV and screaming you can hear for miles away. The house is usually split up during this time as my mumma bear and I support England and my sister and popa bear support Scotland.'

This was a perfect description of our love of Rugby especially the Six Nations Championship.

This is where the fun started, and continued for the whole day and night.

This is what Rugby is about, a man and wife both supporting different teams walking around Murrayfield dressed up to the nines in support of our teams and soaking up the wonderful atmosphere. All fans were mixing, laughing and joking together. It is all about the game and the fun of it.

Laughter is the food of happiness! If something isn’t fun why bother doing it?

In all honesty I have never been filmed so much and we appeared all over the TV.

Especially at the end of the match when Leanne grabbed me and gave me a consolation kiss as Scotland unfortunately lost.

This image of film was used by the BBC Rugby Six Nations production; it even appeared on News at 10…Fame at last!

In hindsight maybe I should have gone in a VIPER tactical suit and helmet and got free exposure for my books.

Walking back into the Hotel, by this time drenched to the skin from the fine Scottish drizzle, we were greeted by the dejected Scottish fans in the bar. Who surprisingly showered us both with drinks, to both celebrate and commiserate with us this wonderful day had by all.

To sum up this adventure; being a wee Fifer with a Yorkshire lass on my arm for the last twenty four years, this weekend was just amazing! The Scottish folk from the Borders to Edinburgh and of course the best rugby team in the world, were so helpful, great humoured and just so friendly, it made the weekend so memorable. 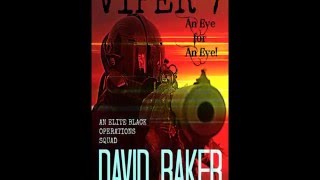 Viper 7 An Eye for An Eye Released!